Traditional and local dresses of India by State

Just like language and food, clothing in India changes depending on the different ethnicity, geography, climate, and cultural traditions of the people of each region of India. India also has a great diversity in terms of weaves, fibers, colours, and material of clothing. Sometimes, color codes are followed in clothing based on the religion and ritual concerned.

In Assam, traditional sari style is two set garment known "Mekhela chador". The bottom portion, draped from the waist downwards is called Mekhela and veil is known as Chadar and is worn with long sleeve choli. 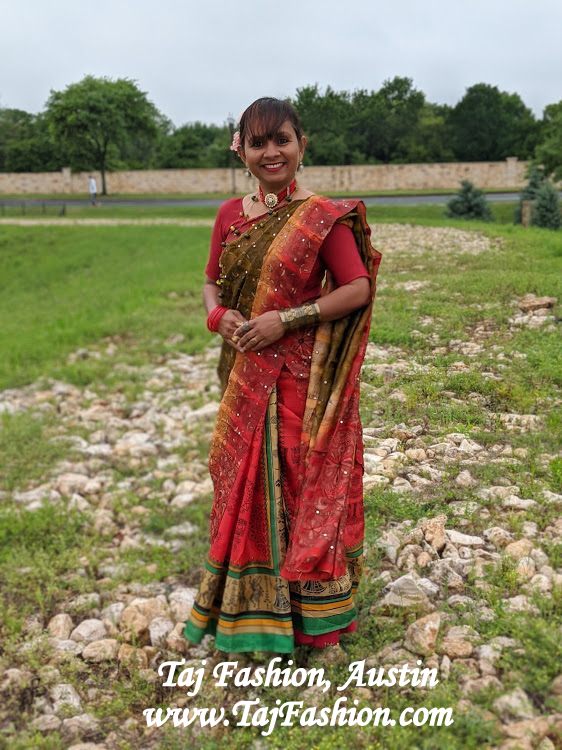 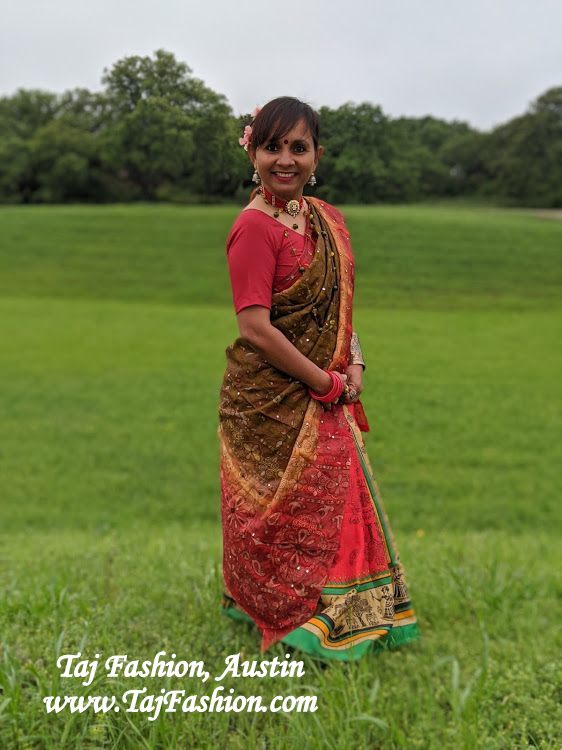 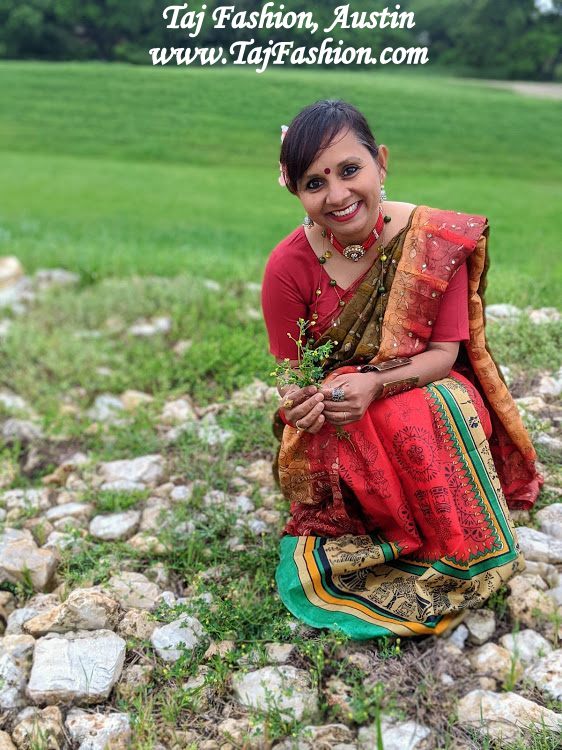 Bihar is a northern India state, name of which is derived from Sanskrit word 'viahara' meaning 'abode'. Also the state, where Gautama Buddha spent his life and founded Buddhism.
The saree which makes Bihar famous is, Bhagalpuri sarees. Bhagalpur is a small town where special tussar silk sarees are made.
The typical style of wearing saree there is "seedha anchal" style meaning, the one end of the saree is brough to the front, instead to the back. Generally, the women also like to cover their head with this style. 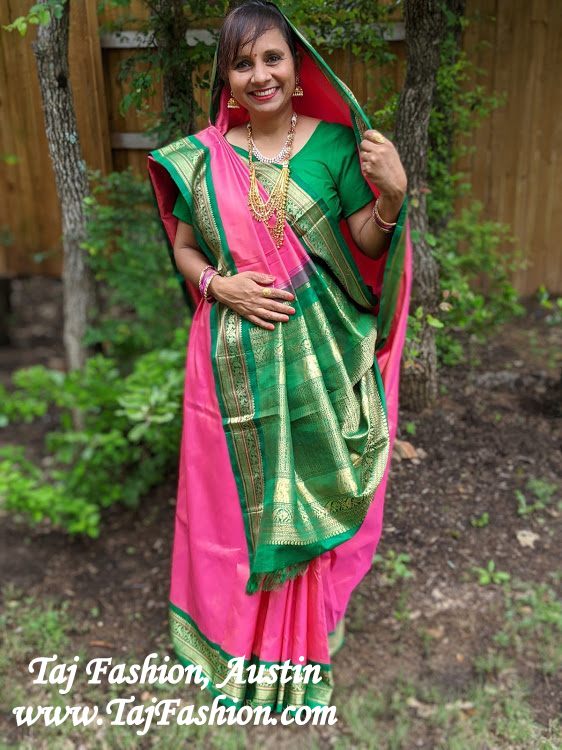 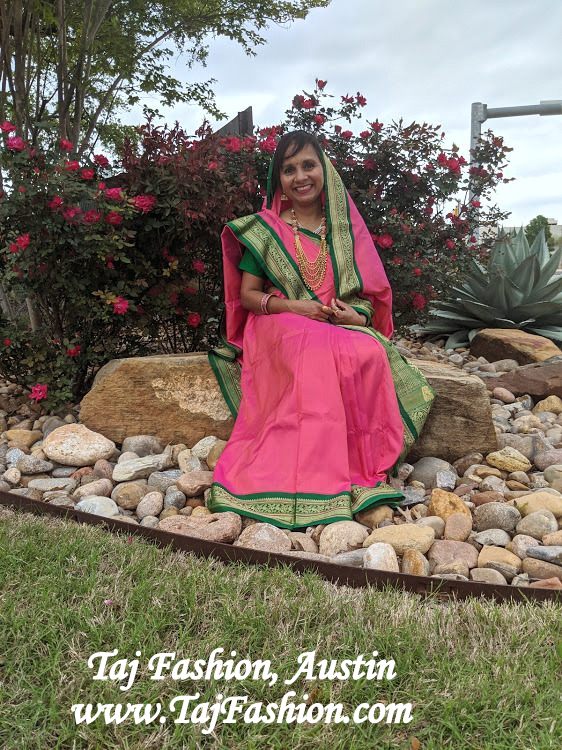 The state is well known for its tribal weaving. The women are famous for wearing `Lugda` (sari) and `Polkha` (blouse) along with attractive ornaments and jewels which was also an integral part of the culture and heritage.
I Also have, a real picture of a vegetable market in Chhattisgarh, where I visited last year. 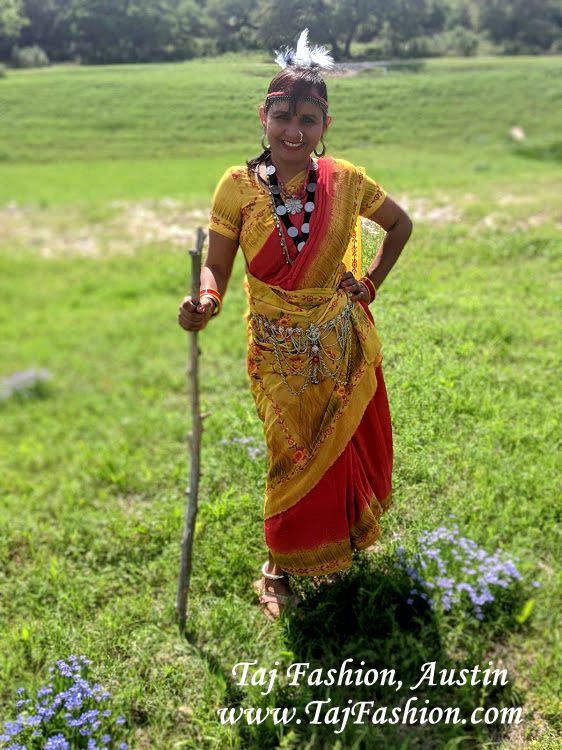 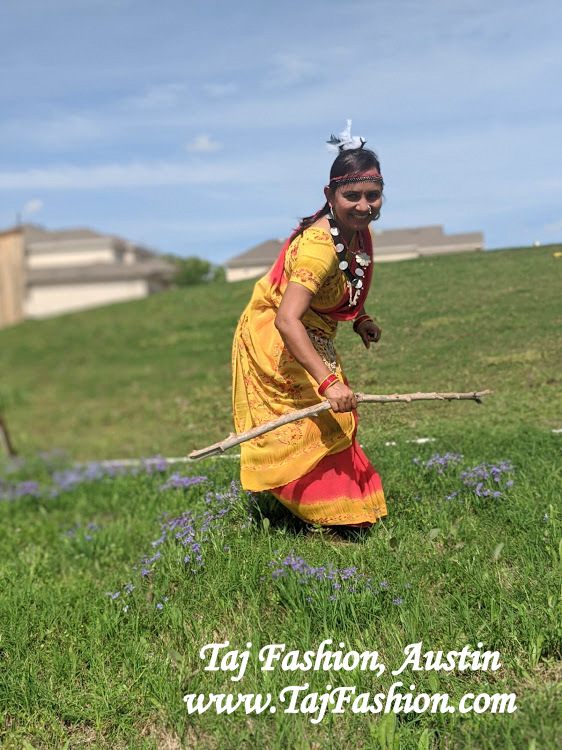 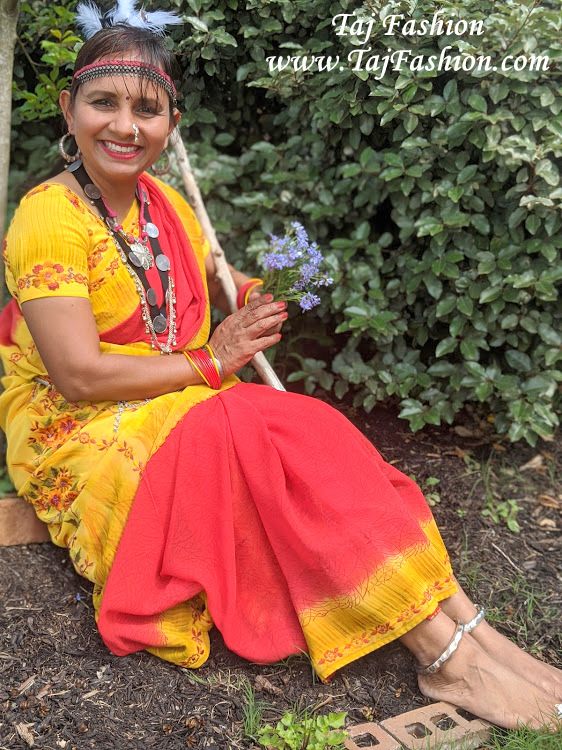 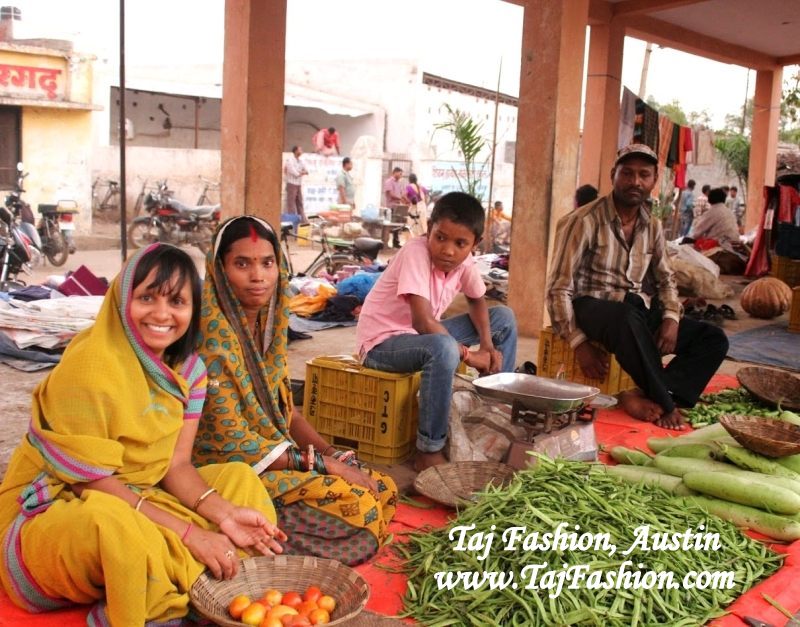 In above three states you would have noticed that a saree or sari is prominent female garment in the Indian subcontinent. It is a day to day wear as well as party wear. A sari is a strip of unstitched cloth, ranging from four to nine meters in length, that is draped over the body in various styles. These include: Sambalpuri Saree from East, Mysore silk and Ilkal of Karnataka and, Kanchipuram of Tamil Nadu from South, Paithani from West and Banarasi from North among others.
We will see variety of dresses for upcoming states.

4. Dresses of India by State - Goa

Today's dress style relates to the south-western state of India - Goa. The state which attracts large number of tourists in India for its white sand beaches, nightlife and carnival.
The traditional costumes of Goa people are very similar to other states of South India. Generally, women wear a sari, which called ‘Nav-Vari’.

My dress is inspired by the fun and frolic of Goa carnival. It is one of the largest carnival in India and one of the few traditional celebrations of the Catholic holiday in Asia. 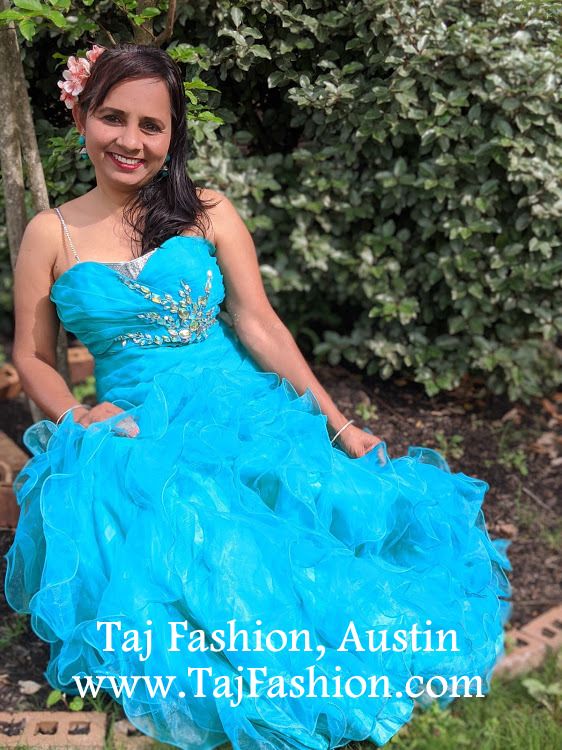 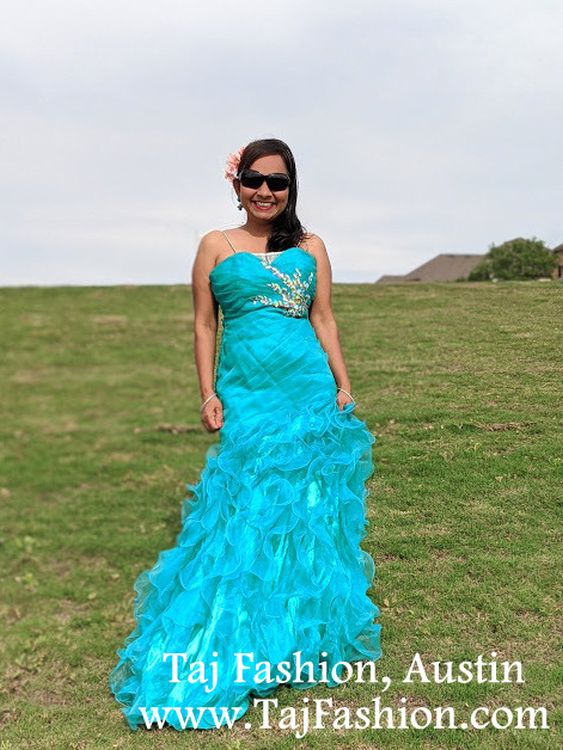 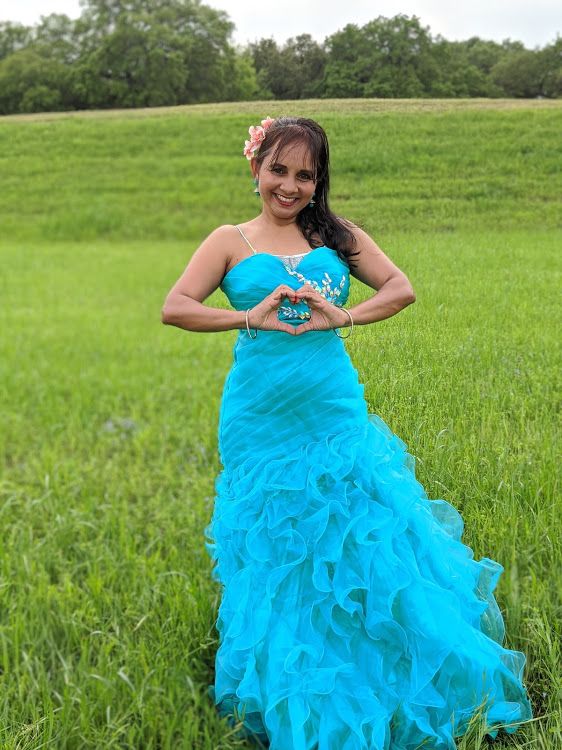 5. Dresses of India by State - Gujarat

dress style of state which is widely represented in US. You might have guessed it right - the state of Gujarat.
With beautiful places like Rann of Kutch and Gir national park, tasty food like Dhokla, Kadhi and various sabzis and beautiful handicrafts like the Bandhani, the state of Gujarat, also known as the ‘Jewel of Western India’ is sure to leave you speechless.
The traditional attire of Gujarati women is Chaniya Choli or Ghagra Choli. They also wear an Odhni (dupatta or chunni) with it. The dress I am wearing is called "Chaniyo". it is a variation of lahenga which is worn with colored petticoat or skirt-like garment. Chaniyo is designed with mirrors and thread work.
The beauty of traditional costumes of Gujarat can best be understood during the festivals such as Navratri or Dussehra when the natives put on their best traditional attires and are in a mood to celebrate.
The lavishness and richness of culture and tradition finds the most aesthetic expression through the costumes of Gujarat. Some of the key features of Gujarati costumes are - Bright colors, intricate stone work, mirror work, bead work; Embroidery styles such as Banni, Rabari, Bavalia; Bandhej and bandhani work.
The jewelries complementing the traditional Gujarati costumes are generally heavy, artistic and intricately crafted in silver. 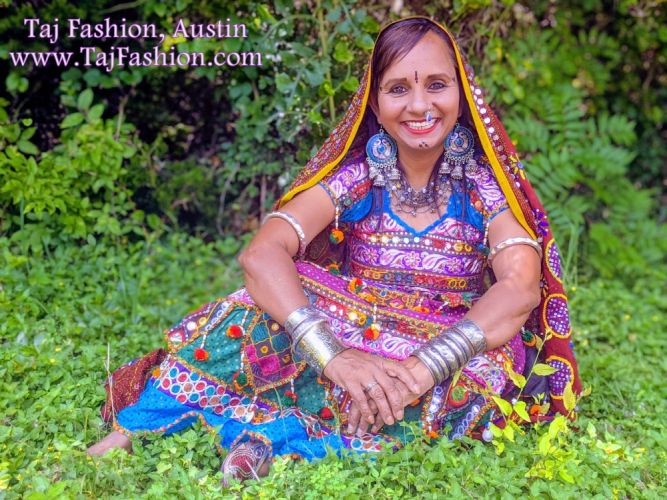 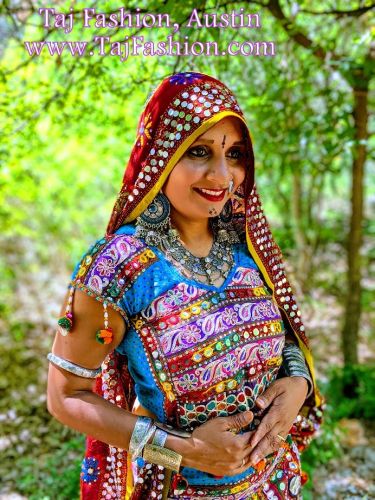 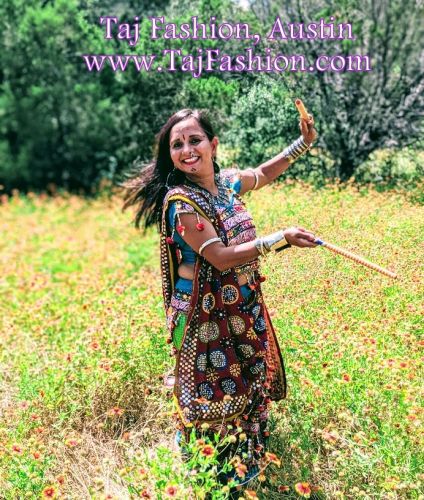 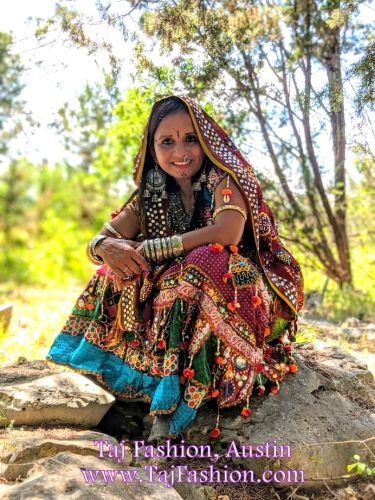 Himachal is the Indian state which resides in the lap of mighty Himalayas. The state with abundance of natural beauty and also of beautiful people. The state is well known for its Hill Stations and handicrafts. Pashmina shawl is one of the products of Himachal. The rich culture of Himachal Pradesh is reflected in the apparel people wear - Kurtas, Ghagra Lehenga Choli. The dresses are long ankle clad and tops with intricate embroidery. Red and maroon are traditionally prominent color. Women can also be seen wearing bulky silver ornament and a nice colorful head scarf called 'Rahide'. Woven in all shapes and sizes, Rahide, comes in different fabrics and patterns. 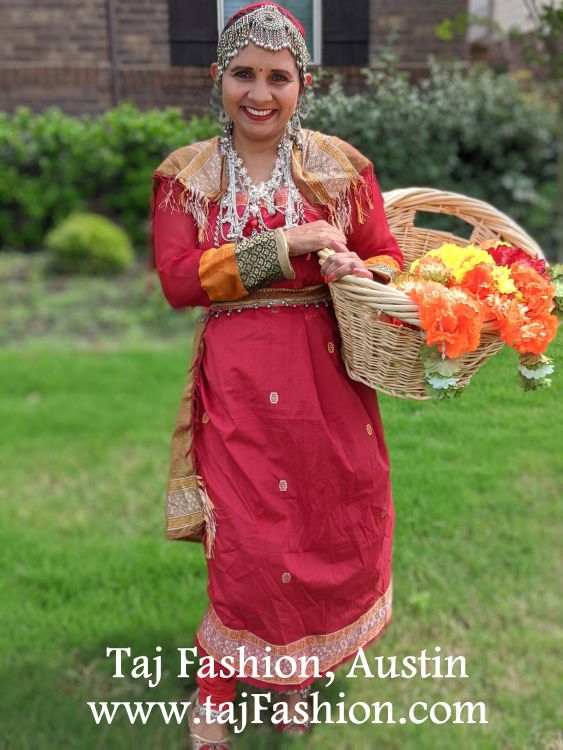 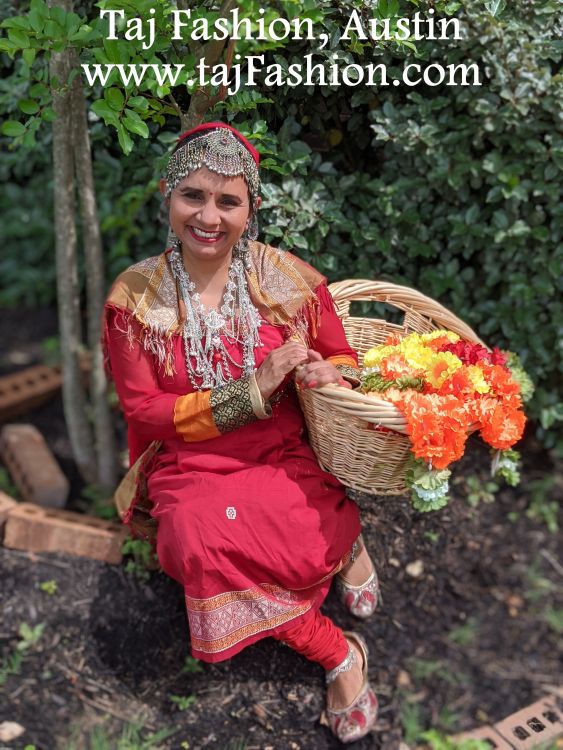 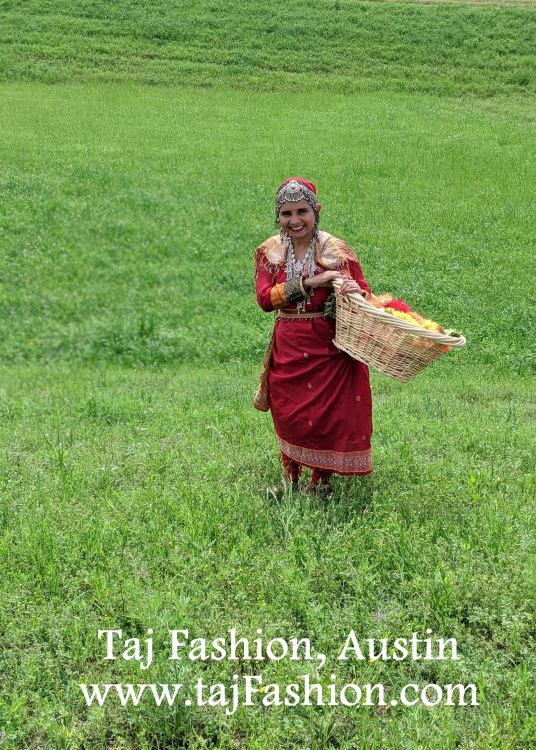 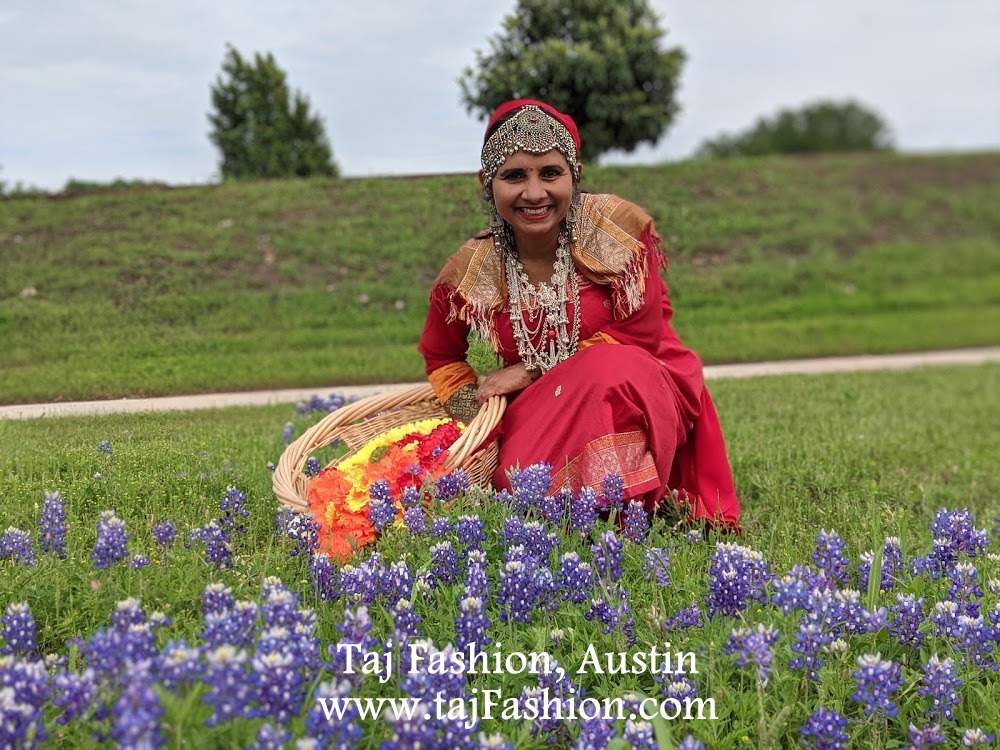 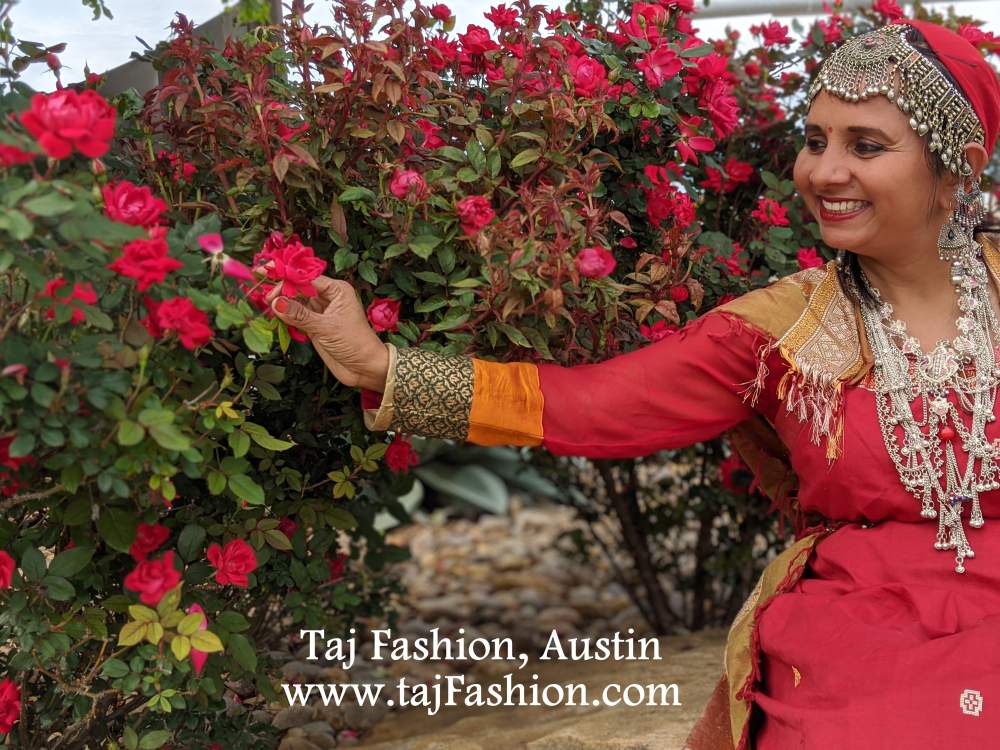 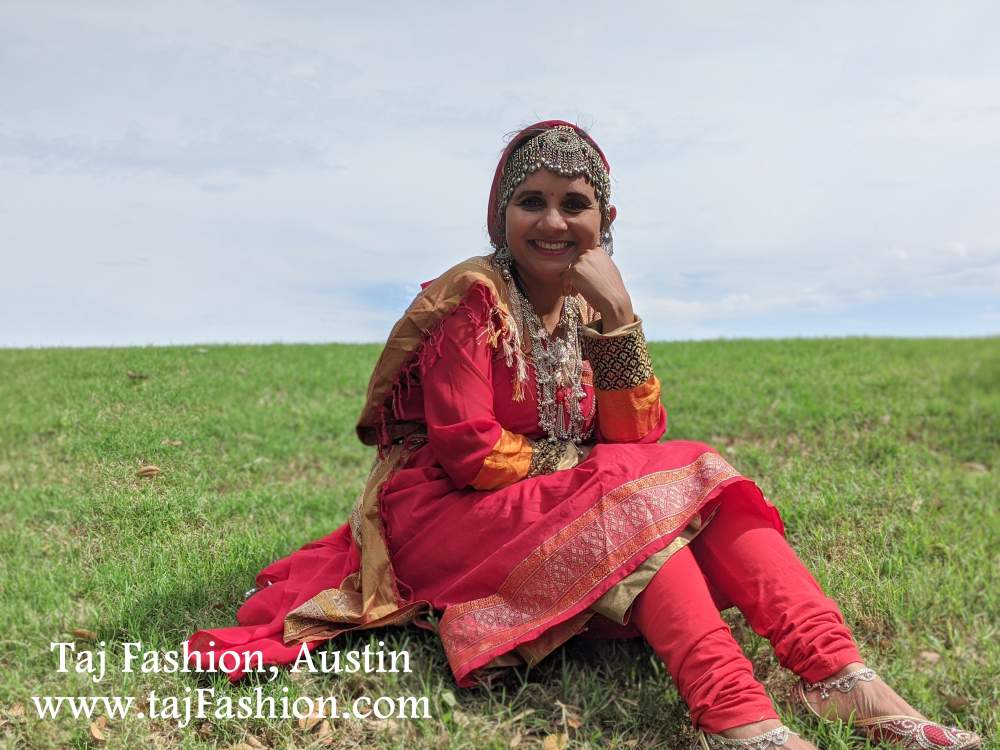